Comforts of Home & Tranquility of Nature 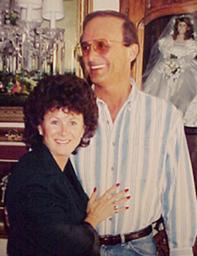 From the time he was three years old, Bill Morelock loved traveling from Maryland to Pennsylvania to visit his grandparent’s farm.  Bill’s grandfather, Pop Krill, purchased the acreage in 1946 with three houses on it.  One, that had fallen to disrepair, he salvaged and converted into a hunting camp.  It was eventually nicknamed “Camp Merryland”.  Camp Merryland was a working farm and also a place where Pop Krill reveled in hosting huge picnics.  He even built a large stone fireplace in the front yard in which he would cook for his 18 hired farm hands and for his picnic crowds which numbered in the hundreds.  As he got older, Bill chose to spend much of his time at the “Krill Farm”.  Little did he know, just how much that choice would lead to monumental changes in his life.

In the summer of 1970, Bill was working in the yard when an attractive, young woman approached him.  The woman, Sandy Kirk from Ohio, ventured onto the property in search of a tour of the infamous Slyhoff’s Grave.  It was love at first sight, and in the spring of 1971, the two were married.  In 1973, Bill and Sandy moved into their new home, the former camp at Pop Krill’s farm.  At this point, Camp Merryland had very primitive living conditions.  It had a shower curtain dividing the upstairs into two separate bedrooms, beat up linoleum floors, 12-foot dining room tables, a unique bathroom with two toilets side by side, and a kitchen with nothing but two 6-burner stoves.  Bill and Sandy had their work cut out for them, but managed to successfully remodel the camp where they first met into a beautifully furnished family home where they raised their four boys.

In 1989, Hide-A-Way Cottages was founded.  The first cottage was a camp adjoining their property in which Bill and Sandy had purchased and refurbished.  With little more than word of mouth advertising, Cottage #1 was rented every day the first year until it was closed for winter.  As they slowly expanded the business, Bill and Sandy (with the help of their boys) began building additional cottages themselves on their property.  For the next 17 years, Bill and Sandy shared their peaceful “Hide-A-Way” as the cottages grew into a favorite vacationing spot that provided couples and families alike with peace, quiet, and a loving place to enjoy nature.

Sadly, in 2006, Bill passed away after a six month fight with cancer.  Soon after, Bill and Sandy’s youngest son, Allen, moved home from Northern Virginia to ensure his parents’ legacy survived by helping manage Hide-A-Way and the farm.  A few years later, Sandy decided to relish in retirement by completely handing the reins to Allen.

Today, the story of Bill and Sandy lives on as Allen and his beautiful wife, Elice continues the tradition of sharing their cherished “Hide-A-Way”, providing guests with peace, quiet, and a loving place to enjoy nature.